It took me a while to muster the courage to walk into Rachel’s bedroom yesterday.  But I recognized the symptoms and I knew the outcome if we waited too long. 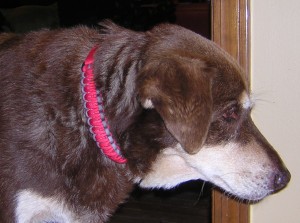 Pablo followed me into her room.  He is a mixed breed brown dog with tan eyebrows.  He is about 14, I think, and is the best dog I have ever known, bar none.

I stood at the foot of Rachel’s bed for the longest time and could not speak.  Then Pablo began to cough, a deep, barrel-chested cough that left him panting.

She wept silently for a minute or so and then said, “I can take him to the vet.”

It’s a trip I know she’s been dreading.  So I told my editor I was leaving and made a bed in the back seat of my car.

Pablo weighs 50 pounds so it took both of us to help him into the car.  He was so weak he could not make it on his own.

As soon as the vet assistant heard him cough we were immediately ushered into a treatment room.  Mercifully there were two comfortable chairs.  Pablo stood the entire time. At one point I sat on the floor thinking he’d come over and sit next to me.  But he was simply too miserable to lie down.

Rachel and I pursued our ongoing conversation about relationships, trust, the difference between rejection and betrayal, and the parts of recovery we cling to, acceptance, service and Trusting the Process.

Woven into that were gentle (I hope) answers to her questions about why we were shuttled back so quickly (cough is a symptom of distemper), why a heart problem would make him cough (fluid builds up in the lungs because the heart is so weak) and what it feels like when your Coumadin levels are off (that’s another story).I was so grateful that the vet clinic had a full sized box of Kleenex in the room.  At one point Rachel just went over and got the box and put it between us because we were going through them pretty fast.

I was grateful for the intimacy of it all, the sort of miraculous energy around it. There was something remarkable about the way the vet looked directly into my eyes as he talked. It seemed that he recognized that I knew exactly what was going on and what we were facing.

I saw the color of Pablo’s blood as it filled the syringe and I knew he was in deep distress because he wasn’t getting enough oxygen.  A tech appeared to take him back for x-rays.

The room was quiet and I summoned courage once again to turn to face Rachel and say, “I need to ask you a question.”  She looked at me.

“Are you ready to put him down?”

She began to cry in earnest and said, “I want Elijah to be here.  He needs to tell him goodbye.”
The vet called us back to look at the x-rays, pointed out the fluid in the lungs and in the abdomen.

“So it’s congestive heart failure?” I asked, and he nodded.  He gave Rachel the names of two drugs he was prescribing and I said, “Lasix is a diuretic.  Is the other one a beta blocker?” And again he nodded.

Rachel asked him about life expectancy; the vet gently said it was different for every dog, and almost incidentally mentioned that it might be as long as a year.

I knew even if we kept Pablo alive for another week it was worth it. There were family members to be rallied, a little breathing room in which to face the inevitable.

A pooling of efforts to illustrate, in color, all five of the Walker treasuries